Polpharma in the top five of Polish National Champions

Polpharma came fifth in this year's ranking of National Champions prepared by the Polityka Insight analytical center. The ranking was published in the report entitled "National Champions 2020. How do they support human capital?".
LinkedIn Twitter Facebook Messenger Skopiuj link

Polpharma came fifth in this year’s ranking of National Champions prepared by the Polityka Insight analytical center. The ranking was published in the report entitled “National Champions 2020. How do they support human capital?”.

Polpharma was ranked fifth, ex aequo with Grupa Lotos and PGNiG. In previous years, the company was classified eighth (in 2019) and sixth (in 2018). Polpharma was also ranked third in terms of Innovation and fourth in the Human Capital category.

– We are proud that for the third time Polpharma is among the national champions, i.e. companies that, through their activities, investments, innovation and international expansion, significantly contribute to the development of the Polish economy. As the largest Polish pharmaceutical company, we also make a significant contribution to building modern human capital based on advanced competences and highly specialized knowledge, sums up Markus Sieger, CEO of the Polpharma Group.

The authors described the winners of the ranking, PKN Orlen, KGHM, as international champions. The next nine – Asseco, Boryszew, Grupa Lotos, PGNiG, Polpharma, JSW, Comarch, Ciech and Stalprodukt were qualified to the category of national champions.

The report “National Champions 2020. How they support human capital” can be downloaded here: https://www.politykainsight.pl/reports/nationalchampions 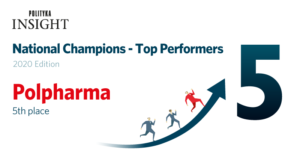